With this headline, I’m repeating one of my Facebook posts I put up just yesterday. I have a story of a dog who escaped and was found by one of our good samaritans. 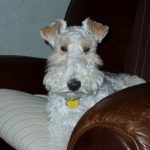 This week, Bailey accidentally got out the front screen door, ran about half a mile down a very busy Dallas street, crossed a major intersection in morning traffic and ended up in one man’s yard. Thankfully, Richard picked up Bailey, looked at his tags and called the Vet’s number on the vaccination tag. The vet, in turn, called to let me know Bailey had been found.

I panicked, of course, because I had no idea Bailey was missing. I called Richard, who told me he put Bailey in his backyard, and was safely playing with his own dog – all of this happening during a pretty big downpour.

I ran over, picked up Bailey (who thought he now had a new home ready-made with a playmate), took him home, bathed him and gave him a treat. None worse for the wear, I was the one who was a basket of nerves.

Once I calmed down, I was about to dial Richard’s number to thank him for his generosity, but he beat me to it! He called me, instead, to make sure Bailey was OK. The next day, I took him a coffee cake and a card to thank him, and was greeted by Richard’s wife at the door – another very kind person.

My point in telling this story is to thank Richard, of course, but also to thank any good person who unselfishly does a kind act for someone else. I don’t know if it was fate or serendipity that landed Bailey in Richard’s yard; I was just grateful that he took the time – in the rain of all time – to take Bailey in and ensure his comfort.