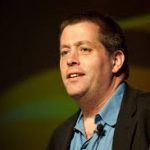 Last week at the AICPA TECH+/Practitioners Symposium, I had the opportunity to hear Peter Shankman, @petershankman, who I can describe as a guru when it comes to helping companies build their businesses through social media, PR and marketing. This wasn’t the first I time I’ve heard Peter speak; I previously heard him at one of the Ragan Conferences – and was just as impressed then by him as I was when I heard him last week.

Peter’s keynote was primarily designed for members of the Association for Accounting Marketing (AAM), who joined the AICPA and the Association for Accounting Administration (AAA) at this year’s conference, but I think his message applied to all attendees. What he talks about and delivers would resonate with firm managing partners and their staffs.

He talked about many things and shared a lot of stories, but one of the primary things that stuck with me was his insistence that if you are going to provide quality services to your clients or customers, try to be “one step above mediocre service.” Most of us would immediately think this concept is WAY short of excellence, but once Peter began telling customer service stories in his own, animated way, it became clear that he was right.

I thought about this concept a lot since the conference. Bryan and I took a few days’ vacation and went to Universal Studios, @UniversalORL, to see Harry Potter and live the amusement park dream. While we enjoyed the parks and had fun, let’s face it: Universal does not deliver the same service as Disney, @WaltDisneyWorld. The first part of the week, at the conference, was spent at Disney – the conference was held at the Dolphin resort. Yes, the Dolphin is owned by Starwood, but when you stay there, you enjoy all the amenities of being on-site at Disney. Don’t get me wrong – apart from a ticket snafu that wasn’t my fault, Universal was good, but I found myself thinking that in many cases, they were just one step above mediocre service. A friend asked me what I would compare Universal to, and my immediate response was Six Flags – just another amusement park.

Second example. I have Sparklett’s @DrinkSparkletts water service for my office so I won’t have to schlep water to the office. It’s kind of a luxury at $22 a month, but then again, I love it because we drink quite a bit of water and use it for the coffeemaker. All I ask is that water is delivered on a monthly basis, but ever since Sparklett’s changed drivers on me, regular delivery is anything but regular. We’re now almost out of water, so I called my guy. Left a voicemail. He called back within 2 minutes, asking me, “What do you want?” I replied, “I left you a vm; didn’t you get it?” He admitted he did not listen to the vm. After telling him we were almost of water, he said, “Oh, I was by last week.” I told him, as I’ve told him and called the 800-number as well, that he needs to call before coming by so I can place the empty jugs outside my door and get new ones. His response? “Don’t you have a schedule?” I did not say that I didn’t have one; he should have known that because I had no idea he had even been by. He promised to come by today.

It’s really simple. Pick up the empties and deliver new jugs, but one step above mediocre service would let me know when he’s actually coming. That’s all I ask.

Now, to relate this back to business, I don’t think anyone should actually settle for one step above mediocre. That’s a cop-out and just doesn’t make sense. There are plenty of accounting firms for any business owner to choose – and more than likely in a metropolitan area, another one within less than a quarter mile.

Same concept goes for software providers to the profession. Try to be more than just another program. Work with your customers to solve their real and valid pain points.

I think you get my point. In my company, I hope I’ve never provided one step above mediocre service. If I have done this, I seriously doubt whether I’d still be in business.

← Realizing a Shift Change in the Way I Consume Content
How Much Do Your Clients Trust You? →
Cytron and Company offers full service public relations, marketing and communications services for accounting, legal, medical, debt collection and other professional service industries, as well as a variety of consumer-based industries.
Scott Cytron  |  972.743.4671  |  scott@cytronandcompany.com