I know it’s cliche to blog about your Dad on Father’s Day, but I feel inspired to do so.

I just called to him to wish him a happy Father’s Day. Also talked to Mom; today is their 62nd anniversary, as well as Father’s Day. They are two amazing people, but today, I’m focusing on Dad. 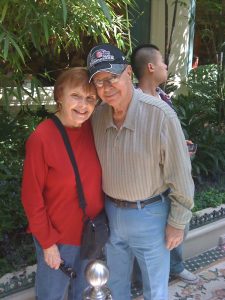 He wishes me a happy Father’s Day as well, to which I told him he was the greatest father that ever lived. He’s the only father I’ve ever had, of course, and I think he’s great. I can count on one hand a few memorable milestones in my life – and one of them came about 10 years ago when my son was pre-teen. My Dad told me I was a very good father. These are the kinds of moments in which you remember exactly where you are when they happen. I was in my house, probably doing stupid chores, when he called to tell me that.

My father is – and remains – a great dad. He’s always there when I need him and takes notice when I don’t seem to need him as much as I think I might. I grew up in a modest household that thrived on a few core values. Don’t talk back to your parents. Clean your room on a regular basis. Dinner was a 6 p.m., sharp, every night. Let us know where you are so we won’t worry about you.

My Dad was a coat salesman, which meant he had a lot of time off from work when he wasn’t traveling and was in between selling seasons. My friends used to envy my situation. Dad was home all summer and all of my winter break. He also didn’t take too much time for himself during these periods. Instead, he played baseball with me, took me swimming, had an occasional afternoon at 6 Flags and even taught me how to play cards.

Dad put me through college. I remember writing the tuition checks for him, thinking, “Gosh, this seems like a lot of money,” but he never once questioned my motives in going to college or denied me the finances to attend. I graduated without any student loans, a rarity for sure.

When I moved back home in 1982, I couldn’t find a job just out of school. He offered to have me travel with him and help him sell coats. I was trained as a journalist, so you can imagine my surprise when he offered this to me. I landed a job shortly after that, thank goodness – and never felt as though he was pressuring me into taking something I didn’t want to do.

Over the years, I’ve come to know my Dad much better because I can now appreciate his sense of humor, his work ethic and his demeanor. I can count on two fingers the times we blew up at each other, but now those instances seem so silly.

My Dad is a great dad – and I wanted to tell him that in just a few words. I may have 15 more years with him – who can say? For every year of those 15 years, I will treasure every moment.