Yesterday, I watched Citizen Kane with my son; he is taking a college class on classic movies and had to watch it in order to do a presentation on technique, innovativeness and other gems in the movie.

OK, I admit it – next to Doctor Zhivago, Citizen Kane IS my favorite movie. Every time I watch it I see something new, esp. if I haven’t watched it in a few years. This time, I found something entirely new – watching it with someone who didn’t know what Rosebud was!

No, Bryan didn’t know. It’s kind of like watching a stage version (not the movie musical!) version of Sweeney Todd without someone knowing the disastrous outcome waiting for our anti-hero … or watching Psycho and not knowing poor Norman Bates had a problem with his mother.

Watching Bryan watching Citizen Kane was great – I know this sounds goofy that I would get this excited about something kind of trivial – but it was really fun. And, I was reminded of the very first time I saw this movie. I was about 10 or so and watched it with my mother and brother. It was a bad print on TV with commercials, of course. When it was all over, my mother asked, “So what the hell was Rosebud?” 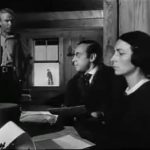 What great memories – all over a movie that was made some 60 years ago. It’s a fresh today as it was when Agnes Moorehead – who played Charlie Kane’s mother – looked young and vital. Too bad she couldn’t wave her hands like Endora in Bewitched and change Charlie’s outcome.

One more thing – the movie poster on the upper right used to frighten Bryan when he was a child – I had it hanging in his bedroom as more of a decorative print than anything else – and of course, I had an affinity for the movie. He used to say the guy in the poster (Orson) scared him. I reminded him of that yesterday and we had a good laugh over it.

← Where Will You Be in 10 Years? Intuit’s 2020 Report Predicts the Future
Eight Tips to Help You Write for the Web →
Cytron and Company offers full service public relations, marketing and communications services for accounting, legal, medical, debt collection and other professional service industries, as well as a variety of consumer-based industries.
Scott Cytron  |  972.743.4671  |  scott@cytronandcompany.com