As the Final Four nears and I reflect on my bracket, a few thoughts jump out: Wow, all these red marks (for losses) remind me of the nightmarish red ink from my grade school papers, and whoa, this tourney was even more unpredictable than I thought.

And, as I begin to remove the bracket pool bookmarks from my computer, while others haven’t fully embraced a paperless world and have some shredding to do (see the photo below of a crazy friend’s wall), we are left with the Final Four. This year’s group features a little bit of everything, so let’s get started breaking it down. 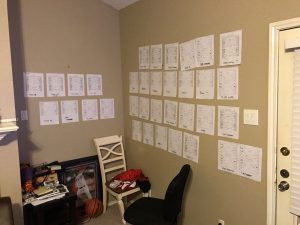 The loss of Chris Boucher just before the PAC12 championship game caused many of us, including myself, to doubt the Ducks. Well, they proved us wrong, showing a recipe for resiliency, shotmaking and big time defense, taking down powerhouse Kansas, among others.

But, it should come as no surprise. Oregon had a similar team to last season’s that took down Duke, and ranked in the top 20 in offensive and defensive efficiency this season, according to KenPom. Their collection of shotmaking, athleticism, experience and talent will be a handful for anybody, as they set their sights on the school’s first Final Four since 1939.

Biggest Pros: As talented and lethal at both ends as anybody, led by sharpshooting assassin Dillon Brooks.

Biggest Cons: The loss of Boucher versus North Carolina’s bigs, and too much one-on-one ball.

It just so happens the Ducks will meet my pick to win it all, the powerhouse Tar Heels of North Carolina. If coaching matters in your college basketball picks, which it should, it’s hard to look past Roy Williams’ accomplishments at North Carolina, which include nine final fours and two championships.

Simply put, North Carolina is one of the most complete and experienced in the nation, and that’s proven to come in handy this tournament.

Biggest Pros: Arguably the deepest team in the nation, with the most accomplished coach remaining in the field.

South Carolina may be from a power conference, but there’s no doubt they’re every bit deserving of a Cinderella. They were definitely one of the bottom 10-15 at-large teams chosen, and did nothing special in the regular season.

They always showed the defensive grit of Frank Martin teams, but they so rarely showed an offensive consistency in the regular season. But, that’s all changed in March.

Led by senior Sindarius Thornwell’s string of four games with 24 points or more, South Carolina has vaulted its way to its first Final Four in school history. With their defensive style, they give any team fits. Throw in some offense and they can slay the giants and reach the mountaintop. Now, wouldn’t that be one of the biggest surprises in tournament history?

Biggest Pros: The intensity of Frank Martin and his defensive mastermind.

Biggest Cons: Will the clock strike midnight on the ultimate cinderella?

Gonzaga: Mark Few Finally Made It

Gonzaga has some great players and it’s hard not to focus on them, but in this case, it’s all about Mark Few. This is a man that has been at Gonzaga for 18 years, and literally built the program from the ground up, from a team no one discussed in March, to a mid-major, and now to its first Final Four.

Despite the wild ride, it’s no shock this Gonzaga team made the coveted Final Four. After all, they lost only one game all season and feature a deep roster with size, shotmaking and National Player of the Year candidate Nigel Williams-Goss. This is not your typical Gonzaga team, as it’s filled with size, experience, depth and stars.

Biggest Cons: Can Mark Few get it done?

As you can see, we have a little bit of everything with this Final Four. It might not be the powerhouse programs that draw great ratings, but we should be in for some very interesting, and hopefully great, battles this weekend.

Without further ado, here are my picks:

Gonzaga 82, South Carolina 71: The great run of South Carolina finally comes to an end, as the Zags are just too good on both sides of the ball, and too focused to let their guard down.

North Carolina 81, Oregon 76: I love Oregon, but wonder if this is the game where the loss of Chris Boucher is felt the most. More than that, I picked the Tar Heels to win it all and am not about to jump off that ship. Should be a really good game!

Finals: North Carolina 78, Gonzaga 73: This one would be a strong final. Even though it’s two one seeds, it’s easy to make the storyline David versus Goliath, considering the history of each program. It might take on a feel of that Duke-Butler game, where Gordon Hayward shot a half-court three off glass that just caromed out at the buzzer. Wouldn’t we be so lucky to see a similar finish?

← The Dr Pepper Method to Handling Calls & Email: Does it Work?
Never Burn a Bridge: A Client Came Back After a 3-Year Hiatus →
Cytron and Company offers full service public relations, marketing and communications services for accounting, legal, medical, debt collection and other professional service industries, as well as a variety of consumer-based industries.
Scott Cytron  |  972.743.4671  |  scott@cytronandcompany.com